“I thought I was dead” – a true story of a strong girl, survivor of Cyclone Nargis 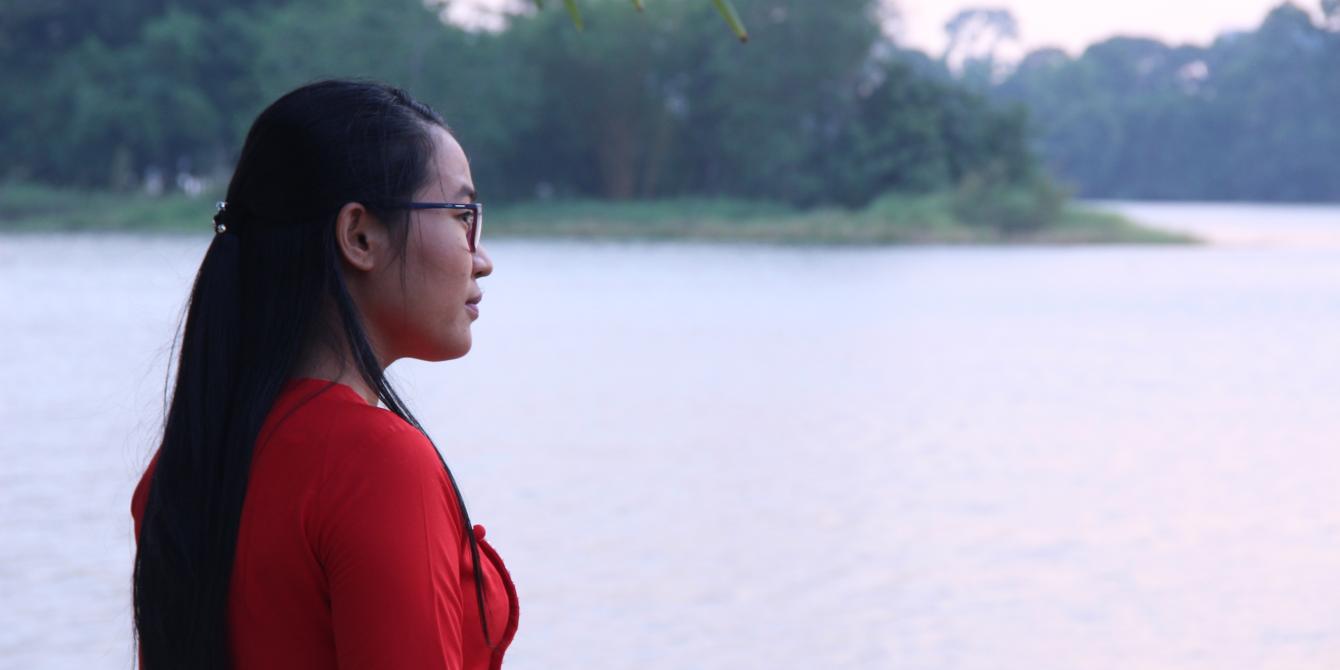 “My family lost me and my younger brother during the cyclone landfall. From the next day, my mother sat beside the creek, looking carefully at dead bodies to find me and my brother, neighbours told me,”
Thet Htar Aung
Oxfam in Myanmar

Myanmar is geographically prone to almost all types of natural hazards such as cyclones, tsunami, earthquakes, flash floods, and landslides, as well as drought in the central part of the country. Despite this, everyone was taken by surprise when in May 2008 Nargis struck.

“I thought I was dead: The coconut tree I was holding was my new life,” says Ma Thet Htar Aung. “It has been 10 years” Thet Htar was a fresh graduate 21 years old girl. As a girl, her parents did not want her to rely on fishing, so they supported her to go to school until graduation. She lived with her parents and 5 other siblings in Lat Tar Chaung village, beside the river in Bogalay Township, Ayeyarwaddy region of the Myanmar delta. Her family relied on fishing, as they were living beside the river. “On that day, I woke up happily because I was going to a wedding in a nearby village. When good things like a wedding happen, we call this a blessed day,” Thet Htar recalls after 10 years. She didn’t know that in a few hours the blessed day would turn into the worst day for delta residents, and the last day for hundreds of thousands of people.

Thet Htar is a survivor of the worst humanitarian crisis in Myanmar, which happened on the 2nd May 2008. Cyclone Nargis: no one in Myanmar wants to hear this word again, but everyone remembers it with painful hearts. Nargis made land with peak winds of at least 165 km/h (105 mph) and some sources assessed peak winds of 217 km/h (135 mph). Two and half million people lost their homes; more than 400,000 hectares of farmland were flooded by seawater, more than 200,000 animals were killed, and over 130,000 people died in a night. Cyclone Nargis became one of the deadliest storms in Asia.

“My family lost me and my younger brother during the cyclone landfall. From the next day, my mother sat beside the creek, looking carefully at dead bodies to find me and my brother, neighbours told me,” Thet Htar said. Thet Htar had been hit by a heavy wave while she was going to rescue her grand-father who could not walk due to a stoke. “Heavy wind had started since 6 PM and it was getting worse minute after minute. My father is an experienced fisherman. He thought we would be safe if we stayed inside the house. But the wind was shaking our house heavily, so we left our home with a motor-boat to go to my uncle’s house, which was stronger. All relatives were in my uncle’s house. I found plastic bottles, and I distributed them to everyone for floating. My mum shouted at me – Please sit and don’t go around – but I left the house to rescue my grand-father. When I arrived beside the boat, a heavy wave hit me and I was hurtled into the river. All I heard after that was: Please Save Us” Thet Htar remembers. The plastic bottle saved Thet Htar. All night she floated with it in the landless water, where she could not know which was the river and which the farming area flooded by the Cyclone.

“I wanted to die and I decided to die. I gave-up.” “It is strange, really strange. When I gave-up, I was drawn into the water. The feeling was so horrible. My head, my ears, my nose were out of my control and the pain I suffered is not comparable to anything. Then, I suddenly awoke and realized: I am still alive, and I have a plastic bottle to float. Until I lose all my energy, I will try to be alive – I swam with my feet slowly, as the wind was calmer at that time. That was a sleepless night. Finally, I got a coconut tree to hold to. I hold it tightly.” Once everything was calm, she saw some land mangroves and she swam to that area with the hope of reaching land. “First thing I saw was dead bodies. Bleeding ears, eyes and swollen dead bodies. I will never forget the scenario I saw when I was 21 years old,” she says. She reached the village called Kone Thar Phyan which is very far from her village La Tar Chaung. “I spent few days in Kone Thar Phyan village, but there was nothing for me to eat. The villagers were cooking the dead bodies of animals which they found on river banks. For me, I really didn’t want to eat them. So, I survived with coconuts from trees and some plastic-packed snacks that floated around.” “I tried to find a way to go back to my family. An old man from my village also arrived to Kone Thar Phyan and together we found a way to get back. I experienced real hunger during those days. Three days of not having proper food is really terrible." She explained that she took everything she found on the way: raw peanuts and bag; a cooking pot; and a knife. “I tied everything on my body with small ropes. As I had long hair, I tied it up without combing it for few days. I must have looked so strange at that time” she laughs and continues “on our way back, we met a group of people who were trying to go to Bogalay town with a small ship they found on the bank of the river. We altogether pushed the ship into the river and rode it to Bogalay. I learned that my parents were still in the village when I reached Bogalay. They were waiting to see my dead body, but I was alive. I asked people going by boat to my village to inform my family that I was alive. Next day, they all came to Bogalay to see me. I was away from my family for 5 days in total,” she explains together with other details of her experience after the cyclone.

As a response to disaster, the government supported by national and international aid agencies began to provide food, livelihoods, health, and shelter. These efforts were trying to respond to the very immediate and severe needs of all survivors, whether women, men, boys or girls. However, many agencies already realized the importance of providing help to strengthen the capacity of communities themselves to prevent, prepare and react to future disasters.

At first, Thet Htar and her family lived in a monastery. After few days, international aid agencies, local civil societies and the government began to provide humanitarian assistance. Everyone noticed Thet Htar, as people really thought she had come back from the dead. Her family had lost everything necessary to go back to normal life: house, fishing gear, boat, as well as a son. “We waited for my younger brother who was 19 years old. For seven days; for seven months; for seven years. But he didn’t come back and he never will,” she says, then our conversation was silent for more than a minute. “Before Nargis we had a plan for our parents. So, we needed money. My brother went farming to make money to look after our parents. But he was taken away from the family by Cyclone Nargis,” Thet Htar added.

Thet Htar went to Yangon after her family had lost everything. As the eldest daughter, she took the responsibility of taking care of the family. “I needed money, but I needed it on a daily basis, not as monthly salary. Although I had graduated, I decided to do casual labour to earn a daily income.” Thet Htar found casual work cleaning bottles at an alcohol factory. She earned 1400 kyats per day. “I was asked to commit for 3 years to work at the factory. They said they would teach me computer and other office work as they noticed I was a graduate. They said they would allow our family to come and stay at the factory hostel too. I was very happy. They were very nice to me.”

But a phone call by someone she knew from UNDP made her confused about her further career. “I was asked to volunteer in the response of Nargis in Bogalay,” she says. “I was thinking for a whole night because in the factory I had a paid job and they would give a space for my family to live. I thought the volunteer job would be unpaid. But I thought helping people was more important. So, next morning I went back to Bogalay to help people as a volunteer. I worked with Care Myanmar, connected by UNDP. After 15 days of volunteering, I received payment and I was surprised. I didn’t know this was paid volunteering,” she laughed and said.

Nargis destroyed the lives of millions of people in the delta, including Thet Htar’s family. But those who have good heart, willingness to help others and who try-hard like Thet Htar will have a chance to rise up again. Thet Htar joined Care Myanmar as a community facilitator after few months of volunteering and then became junior programme officer. After two and a half year, she joined a local organization called Swe Tha Har and worked there for 1 and a half year. Finally, she joined Oxfam in Myanmar in 2012 as a field officer under the European Union Funded project and worked for the reduction of disaster risks and preparedness in delta. This work was part of the increasing attention being given in the country to making individuals and communities stronger to face disasters. In Oxfam, she has worked in several positions and nowadays she is working on women’s rights and women’s participation in local administration and governance.

“Throughout the past 10 years, I could buy a house for my parents in Bogalay Town. We sold our land in the village because I don’t want my parents to go back to the village. I would be really afraid if they were living besides the river again,” says Thet Htar who really is one of the most resilient and strong girls I have met.

“I want to encourage my fellow Nargis survivors and everyone not to give-up. I experienced giving up. I was about to die after I decided to give up. But I didn’t. Now I want to say never give up. Even when you have lost everything, there are chances to rise again. The deepest trauma will not be healed but eventually everything becomes easier. Don’t Give up.”

10 years have gone by since Nargis. Although there is not being a disaster like that, Myanmar has experienced another cyclone (Giri), flash floods, drought, earthquake and fires. This is a reminder that the courage and determination of individuals like Thet Htar is not enough. Everyone must be aware, and well-informed of disaster risks and how to face them. Government and other organisations have the responsibility to implement the existing policies on disaster risks reduction, especially to ensure that women, men, boys and girls have the capacity to protect their own lives and livelihoods for the long term.