“What do you think about worms? Would you be comfortable working with worms?” Bagus Setyawan from Oxfam’s Global Humanitarian Team asked me while we are talking about solid waste management in camps in Rakhine State where conflict affected people are temporarily settled. The question seemed odd when I heard it first.

Before joining Oxfam, I worked for other non-governmental organizations based in Rakhine as a Public Health Engineering Officer. Prior to that, I was working for the government’s public construction department. In those years of working where I got to use what I learned from my engineering course, it never occurred to me that worms could be something of a technological wonder.

As I eventually learned from Bagus, we will be using tiger worms in the desludging of waste from toilets in camps for internally displaced people (IDPs). The normal procedure for Water, Sanitation, and Hygiene (WASH) experts in the cleaning of the shared family toilets is to bring in a large tanker, which empties the toilet pits and takes the waste out of the camps to be treated. This is done every two months, and sometimes even as frequently as every two weeks which is a very costly and labour intensive process. With this tiger worm innovation, we are cutting down on the costs and the labour for waste treatment as we are letting kilo after kilo of worms do the job for each toilet pit. Using tiger worms makes a lot of sense, because tiger worms survive and reproduce by feeding on organic waste and with this technology, we would only have to excavate every four years.

Even with this knowledge, I must admit that I was terrified when Bagus first showed me six kilograms of tiger worms; I panicked when I first handled the worms, especially when they started moving in my hands. But I knew I had to get over my initial anxiety towards the worms, because I knew how this was used and had been proven effective in other countries. I learned that in other humanitarian camps where this has been used, it increased environmental and economical sustainability.

The tiger worm toilets look just like any other toilets you see in camps. What makes it different is the pit design where we put the worms; it is shallow so the ground water will not reach it. Inside these pits are coconut fibres that serve as a bed for the worms. Covering the pits are fly screens, to make it easier for us to repair.

When I first introduced this technology to the communities living in camps, some women were initially scared, just as I was. But then I explained that this technology would mean fewer problems in the desludging of the toilet pits, and that they would no longer need to be emptied so frequently.  After understanding the technology, the women have become more receptive to the idea of  the tiger worms. They even began to prefer this to the normal toilet setup that they are used to.

After a recent monitoring visit, people from the communities said that, compared to the usual toilet setup, the toilets do not smell and do not attract flies.  These comments from communities we are serving make me very happy. This only means we are doing a good job and this innovative solution to waste management can be replicated by others as well. 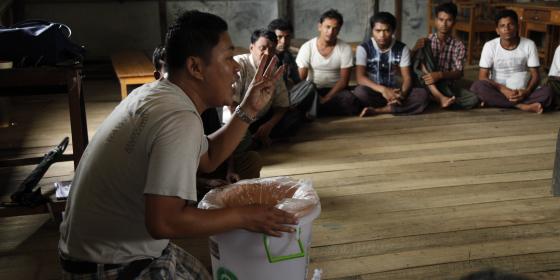 Oxfam provides life-saving assistance to people affected by conflict and disasters across Myanmar. At the core of these efforts, Oxfam is focused on building the capacity of communities and local organizations to deliver emergency relief in rapid and accountable ways. One initiative, the Emergency...