“I want to talk to women to never give up. Don’t take challenges and attacks as personal, try to overcome them. Those will be steppingstones for success.
Daw Doi Bu

“I’ve faced a lot of challenges in my political journey. All the struggles made me stronger. The reason I ran the previous election in 2010 was that I wanted to amend the constitution as I know it is a space to do so. This time, I am running in the election because I want to work for my people and tackle injustice. In the past, men took chair positions in political parties. Now, I am taking part in leadership roles and policy development in our (Kachin) solidarity party. I was appointed as No.1 Vice-chair of the party, taking responsibility for policy development and acting as a spokesperson,” Daw Doi Bu from Kachin State People’s Party (KSPP) said. She was a member of Pyithu Hluttaw in 2010-2015 Hluttaw, representing Injangyang Township in Kachin State. She is running for Amyotha Hluttaw in the upcoming general election, representing the Myitkyina constituency.

Daw Doi Bu was born in Kachin state, but she and her family were forced to flee from their home due to the armed conflict when she was just one year old. Her house and the village burned during the civil war in 1962-1963. Growing up, she was largely shielded from discrimination based on her ethnicity, but this changed when she went to Yangon University. “I was asked that - do Kachin people eat human? I answered – Yes, we do when we get angry,” she laughed.

Myanmar is a multi-cultural country where different ethnic groups live together. However, there have been and there remain many stereotypes, biases and discriminatory attitudes towards members of different ethnic groups, which have contributed to the additional barriers, especially women and girls, in terms of accessing opportunities and pursuing leadership positions. “We must claim our rights to be able to enjoy it. We need the confidence to do so,” Doi Bu recalled her memories during her day in the university urging for an opportunity to give a speech on the day of commemorating the Union Day.

Daw Doi Bu studied Law at university and has been working as a lawyer since she graduated. “Since 1991, I have supported many legal cases, and the majority of the cases were under 17(1) – the Unlawful Association Act. I helped my clients as much as I could. I have witnessed the injustice that is caused by poverty. I did my own business for income and supported my clients who were in need”. Doi Bu also participated in the 1988 uprising. She was also one of the ethnic representatives from Myitkyina nominated to attend the national conference for drafting the constitution. “When we discussed the constitution at that time, there were very few autonomies for states. We could not discuss it specifically, and we didn’t know how to. Although I didn’t know what Hluttaw is, I noted that it is a space to amend the constitution,” she said.

Daw Doi Bu said, “I wanted to be in the decision-making role as a woman. I want to work for other women. In the first election in 2010, I have to compete in a constituency that I was not familiar with, and it was a hard-to-reach area. In this election, I have to take a bigger responsibility as my constituency is larger. Women can take on  responsibilities that are harder and more difficult.” 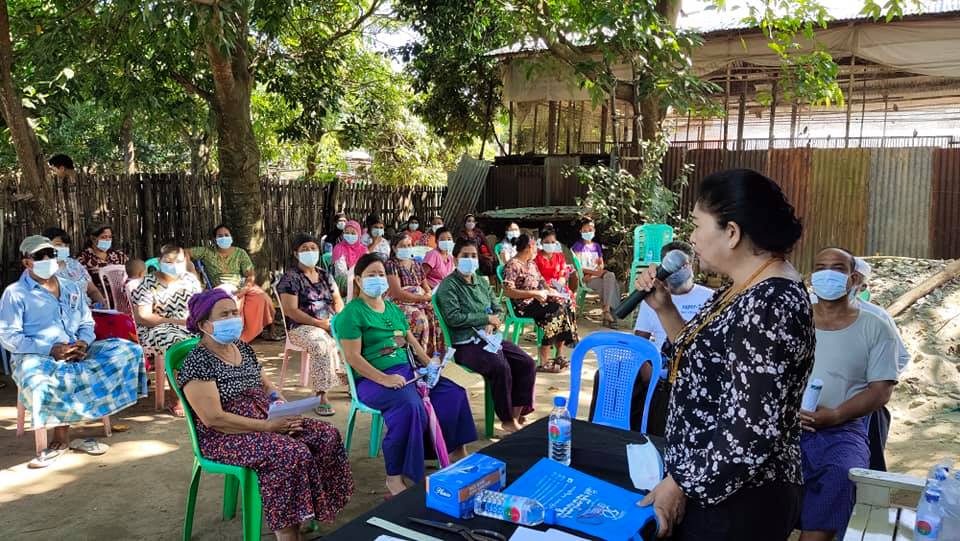 In Myanmar, according to 2019 data, women’s participation in parliament is less than 12%. A Lack of women role models in politics; social norms that enforce politics as not women concerns; traditional beliefs that recognise women as supporters for men; and cultural practices that acknowledge men as household-leads are some of many barriers that women are facing to step into the leadership role. Research findings and experience of women leaders has proven how the patriarchy has influenced Myanmar’s society that prohibits women from becoming leaders. Those situations could be worse in the remote and conflict-affected area, and more barriers and challenges exist for women and girls from minorities.

“I want to talk to women to never give up. Don’t take challenges and attacks as personal, try to overcome them. Those will be steppingstones for success. Some women have to struggle alone without their husband’s support. Some women faced physical and emotional violence committed by their breadwinner husbands. Some women gave up their dreams as they struggled with household chores and family responsibilities. I also struggled with my professional life and family responsibilities. We have to be strong to overcome. No matter how many challenges we face, just keep in mind to never give up.,” she said.

Disclaimer: All photos used in this story are taken from Daw Doi Bu's Facebook account with her permission.