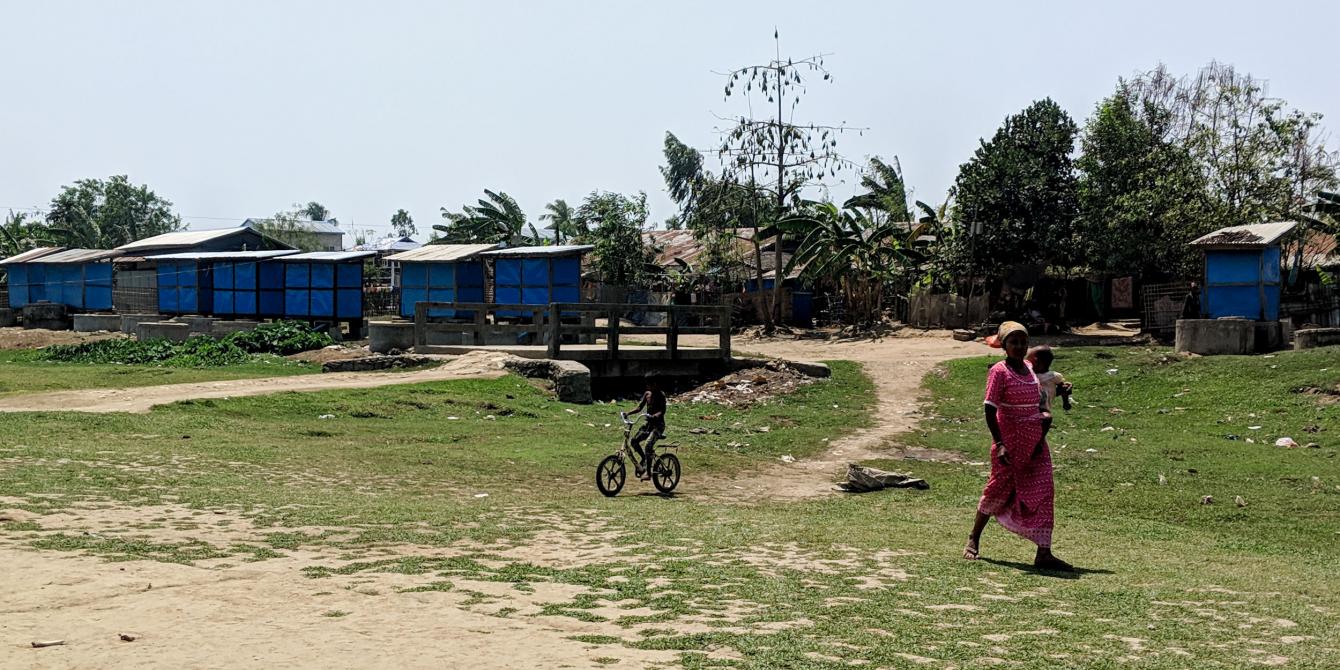 While the Rohingya crisis is perhaps most visible in the refugee camps in Bangladesh, the underlying drivers have been ongoing in Myanmar for decades. In Rakhine state, Rohingya and many other communities continue to face violence and abuse, with serious consequences for their ability to access basic services and live in safety. Alison Kent, Oxfam’s Director of Advocacy & Communications, explains how our water and sanitation program is giving women more opportunities to be involved in the decisions that affect their daily lives.

Alongside our humanitarian response in Bangladesh, Oxfam is supporting crisis-affected communities in Rakhine. We focus on delivering clean water, building latrines and stopping the spread of disease with 100,000 Rohingya and Kaman internally displaced people (IDPs) who have been living in confined camps in incredibly difficult conditions since 2012. With no end to their displacement in sight, we have tried hard to focus not only on providing these key services but also on fostering dignity and empowerment through our work.

We have had big wins in our efforts to build in choice and agency, such as our innovative accountability system that enables people to report issues using electronic tablets, with the information immediately sent to specific technical staff assigned the task of addressing a given issue. And in a new initiative, Oxfam staff have been working with small community groups to create public health messages and campaigns, with the IDP participants leading the whole process from start to finish.

And we’ve had small wins too, like ensuring women can choose the color and size of their underwear during our distributions of basic personal hygiene items. As Sonya Milonova, Oxfam’s WASH Coordinator described it, “Based on consultations with women in the community earlier this year, it was clear that the number of sanitary pads distributed in hygiene kits was simply not enough. What was also clear was that some women were too often unable to use these pads because they didn’t have underwear.” Quickly adapting the program, Oxfam decided to distribute both underwear and sanitary pads and to do it in a different way—instead of asking someone from each household to pick up items from the office, Oxfam staff gathered women from nearby households and allowed them to choose the colors and sizes they wanted in a safe and private environment.

As one female participant explained, “The distribution of the items was at the community level. Each group was only a few women, and the facilitators were women, so we felt comfortable to talk openly about the items and about menstrual hygiene.”

These small gatherings during the distribution also allowed women to get answers to questions they would have felt too shy to ask during a normal distribution. One participant said, “Even though women were using these items before, not everyone was sure how to use them properly.” Another added, “During the hygiene kit distribution, women learned how to use underwear and sanitary pads. These are very useful items for women, and we need them regularly.”

These are communities where people are rarely able to make decisions about their own fate, and women within those communities have even less power. Distributions of various items are common in the camps, but people rarely get a choice in what they receive, and it’s usually men who pick up the items for the whole household. A distribution of items tailored to women’s needs presents a small but meaningful opportunity for them to exercise their decision-making power and engage with other women on some of the specific issues they face.

This approach links back to the way the program is focused on listening to communities and taking their cues on both what services they need and how they want them delivered.

Ultimately, the root causes of this ongoing human rights crisis in Rakhine must be comprehensively addressed in order to end the violence and segregation. Recommendations from the Rakhine Advisory Commission, released 2 years ago on the eve of military operations that saw the exodus of 700,000 Rohingya to Bangladesh, must be implemented in their entirety, including lifting of movement restrictions and ensuring equal rights for all communities.

While we continue to advocate for durable solutions over the long term, we are also focused on building small spaces for greater dignity and choice for those living through this crisis every day.