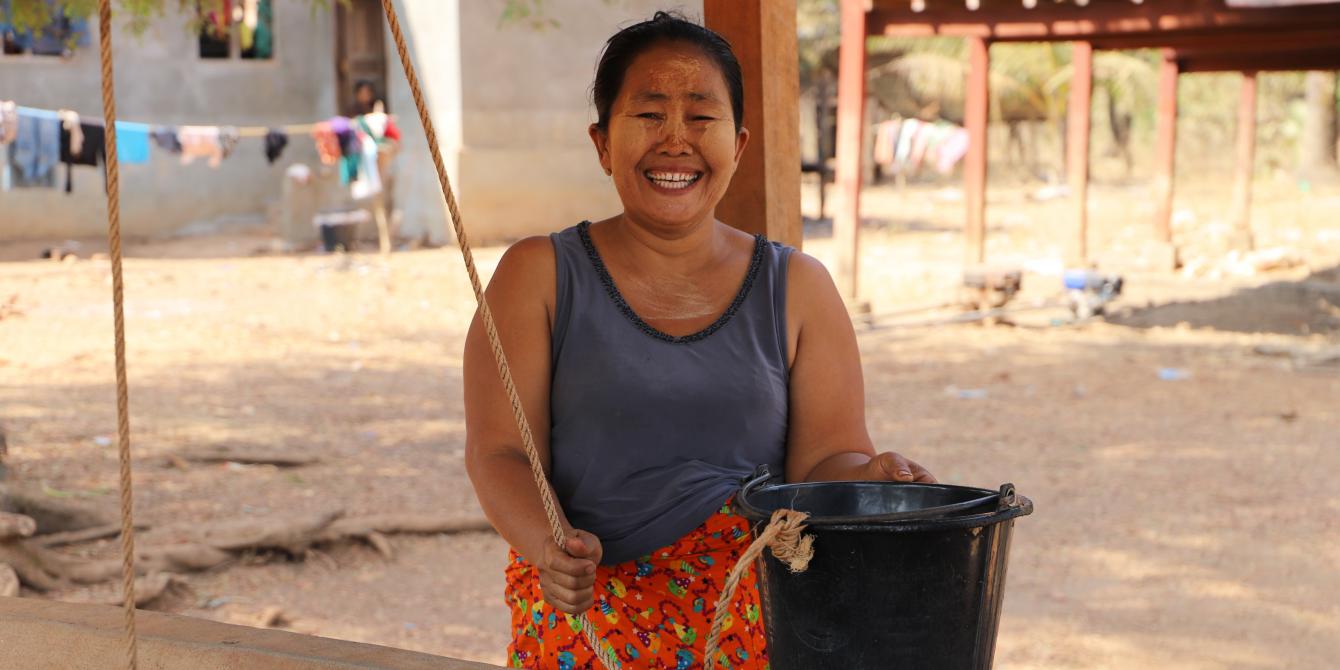 In 2019, Mon state suffered from one of the worst natural disasters in its history. Serious flooding affected the lives of thousands of people, particularly those residing in harder to reach remote villages.

Kaw Wat village in Kyite Ma Yaw township, has an population of approximately 400 people and is one such remote village. This community was severely affected during the flood and the village’s surface-wells were flooded by the water from the nearby river, becoming polluted and ultimately unfit to use for drinking water. Daw Thin Wai, a 49-year-old woman with and resident of Kaw Wat, was one of those who was affected by the flood. “We faced so many difficulties during the time of emergency, especially for the drinking water. We had to rely on the water bottles provided by the donors and charities from the nearby towns, but the supports were limited, and we were afraid of when these water bottles would run out”, said Daw Thin Wai.

Together with local civil society partners, Oxfam in Myanmar initiated an “Early Recovery for Mon Flood” project in the flood affected villages in Mon State in early October 2019.  Together, Oxfam and our local partners mapped out what was needed to ensure a timely and comprehensive recovery across the state, identifying areas that were not receiving needed assistance and which needed additional supports to recover. Kaw Wat village is one of the villages which identified for this early recovery assistance.

“We have wells in the village which we used for the drinking water, but when they were flooded during the flood, they became polluted and unfit for drinking from. Oxfam helped us to purify the wells, they pumped out all the polluted water using the water pumps and cleaned up the wells. And they demonstrated and explained how to use water purification tablets to get clean and drinkable water”, she said.

Alongside support to purify and clean the wells, Oxfam built concrete walls, a roof and cemented base for the wells while providing needed equipment for the community to easily access the water, such as water buckets, rope and pulley wheels.

“Our previous wells did not have the walls and proper ground base. So, it was very dangerous, because people and animals could accidentally fall into the well because there were no walls and the base could be very slippery. We had an accident of one young girl who fell into the well and hurt herself. Also, some animals such as dogs and cows fell into the walls and died, which also contaminated the water. Without the roofs, leaves and other rubbishes could easily fall into the wells but now they are fully protected with the strongly built roofs.”, “We had to use our bare hands to pull the water from the well, it was not easily, and our hands got hurt. But now Oxfam installed pulley wheels in the wells, so we can pull the water with ease”, Daw Thin Wai added.

Oxfam helped purify and rebuilt four wells in total across Kaw Wat, with these wells meeting the water needs for entire population of the village.

“We are so thankful for the support which Oxfam provided. Because water is the essential thing for our lives and day to day activities. And we all will work together to keep these supports (water wells) to last over the long-term,” she concluded.