A country’s budget is perhaps the most powerful tool a government has to implement its policies and advance the rights of its population. It can also be an important vehicle for holding a government to account. Together, these help to lay the foundations for a social contract built on an active, informed public and an effective state – the cornerstone of a democracy.
In Myanmar, which is transitioning away from decades of centralized political control towards a range of reforms, including an ambitious decentralization agenda, a public financial management (PFM) reform programme offers unprecedented opportunities to engage the public in planning and decision making on public finance issues which affect their lives every day, and move Myanmar a step closer to embedding the fabric of democracy in government.

A good PFM system can enable a government to be transparent and accountable in its decisions, tackle corruption and deliver key services to the public more effectively and efficiently. This is why PFM reform represents an important mechanism both for reducing poverty and inequality and for deepening social accountability.

But the current PFM reform agenda in Myanmar may be undermining its own objectives by prioritizing technical reform at the Union level of government, and paying insufficient attention to the demand side of the management of public finances – ensuring the public understand and are able to hold the government to account on resource allocation. This creates risk because as suggested by international experience, supporting PFM reform from the top down (through the finance ministry) either fails, or delivers very slowly.

This is not the only risk. The PFM agenda is intertwined with Myanmar’s protracted ethnic conflicts, national peace process and contests over the legitimacy of different governance actors and structures, particularly where armed groups have developed complex local administrative decisions and provide public services in the areas they control. If efforts to support PFM do not consider these dynamics, they will, at best miss opportunities to support long term peace in Myanmar and, at worst, complicate or undermine that political dialogue. For development partners, greater public accountability and the improved ability of civil society to influence development decisions will also mean aid investments are better spent, maximizing the impact of donor investments.
Given the need to ensure PFM reforms promote greater social accountability and the challenges around legitimate governance in contested areas, Oxfam believes there may be three challenges for the current approach:

1. Too much of the reform programme focuses on the Union level, without sufficient strategies for building the capacity of officials at the state/regional level and below, or without considering whether or how similar capacity development should be supported with officials from ethnic armed group (EAG) administrations.
2. There is too little investment in the demand side, including raising awareness among the public of the budget process and building the capacity of civil society organizations (CSOs) to stimulate demand for fiscal information and greater budget transparency – and ensuring this demand-side work supports civil society from contested areas to participate in discussions around Myanmar’s PFM system. This must involve ensuring that women and marginalized groups are increasingly participating in these processes.
3. More thought needs to be given to how PFM reforms may affect future governance arrangements in contested areas, including whether the very process of discussing PFM reforms with EAGs and civil society from contested areas might be part of negotiating the political pact around governance that will be needed for long-term peace in Myanmar.
4 Deepening Democracy in Myanmar

On the other hand, there are also opportunities for using PFM to deepen social accountability including:

These phenomena will only become opportunities for PFM to deepen social accountability if the reform programme is able to refocus and begin addressing the key challenges it currently faces.
Given the potential for PFM reforms that are focused only on technical support at the Union level to, on the one hand, miss opportunities to deepen social accountability and, on the other, risk undermining gains made in the wider political/peace process, Oxfam believes there are a number of questions development actors involved in and supporting such reforms need to consider. There are no simple answers to these questions, so this paper should be viewed as a contribution to ongoing discussions around PFM reforms, social accountability and the role of governance in Myanmar’s many conflicts.

In lieu of recommendations, a selection of key questions (listed in the final section of this paper) will be addressed at a forthcoming roundtable discussion on this subject and taken forward for reflection with key policy makers and development partners. 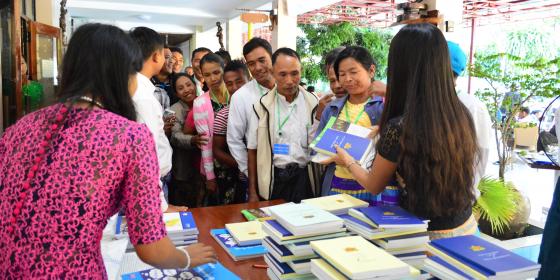