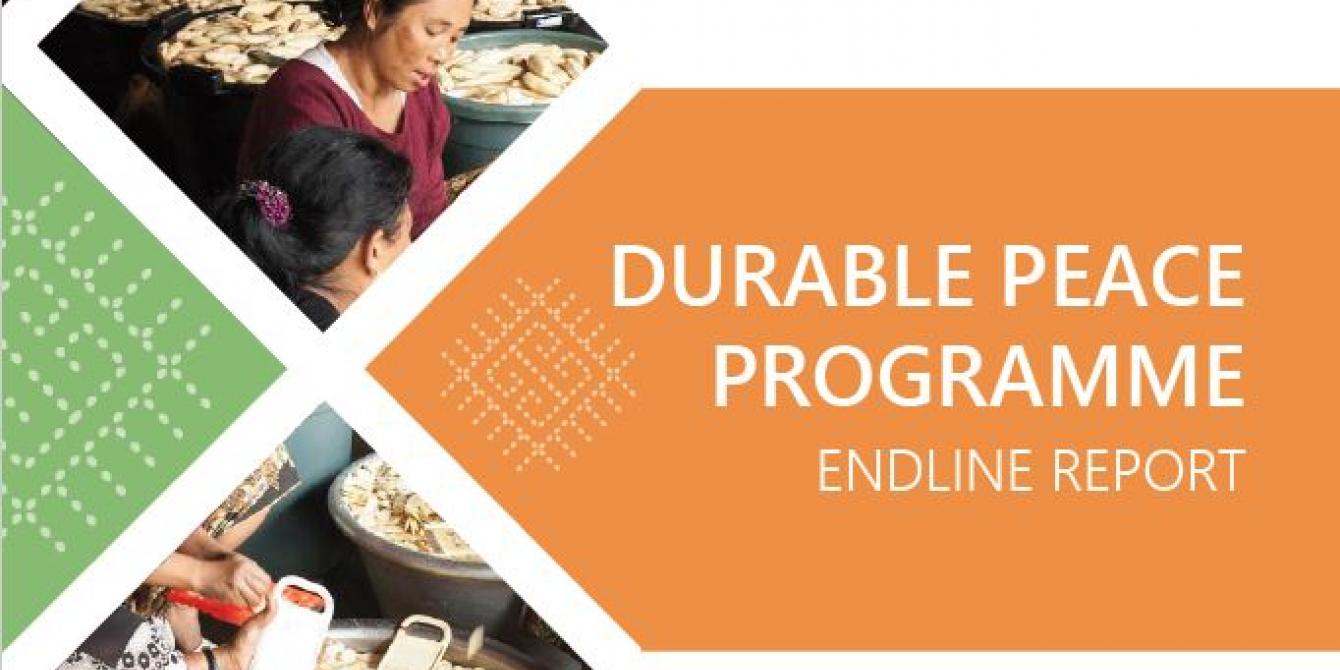 This endline report builds upon the foundations of the Durable Peace Programme’s (DPP) baseline report with two significant years in between data collection.

The baseline data was collected over October and November 2015 – an extremely hopeful time in Myanmar’s recent history. A National Ceasefire Agreement (NCA) had just been signed (albeit not by the KIO/A) and expectations of the peace process were high – as were expectations for landmark democratic elections held on 8 November 2015.

Also conducted over October and November in 2017, the context for the endline data collection was very different. In the past two years, armed conflict has escalated significantly, the peace process has largely stalled and the humanitarian situation has deteriorated for the over 100,000 IDPs in camps, including the re-displacement of over 6,000 IDPs in early-2017 and new displacement in Tanai in mid-2017. It is hoped that the comparative results of the two surveys can stimulate consideration and improved action related to these contextual changes.

The responses to each question provide many insights into the current context. The following are six headline findings but readers are encouraged to look at the complete data and analysis to help inform further understanding of Kachin.

o Security: KCA/NGCA IDPs report an increased sense of threat from armed conflict. Since the collection of data from the baseline report, the situation in Kachin has considerably worsened with a sharp escalation in armed conflict over the past two years. IDPs identify attacks by armed groups (particularly the Tatmadaw) as the greatest threat to their security. Increased military operations, including the use of airstrikes and heavy artillery in close proximity to IDP camps and populated areas, have increased the number of civilian casualties and injuries, impacting negatively on security.

o Vulnerability: The endline figures indicate increased vulnerability on a number of fronts, including loss of livelihood and worsening physical security. The most pronounced difference between the endline and baseline findings is a decline in incomes across all quartiles for KCA/NGCA IDPs. In this context, the bottom 75% remain extremely vulnerable with the bottom 25% reporting no income at all over the 12 months previous to the survey.

o Socioeconomic: The socioeconomic situation for IDPs in KCA/NGCA has substantially deteriorated in terms of cash incomes and savings. Although there has been some increase in food savings, IDPs are eating an increasingly narrow diet. This steep decline is worrying, and highlights an urgent need to comprehensively address restrictions on the delivery of humanitarian assistance and the limitations on peoples’ movements in and to KCA/NGCA (and any other areas facing such restrictions). This should, at least in part, alleviate some stress on the socioeconomic situation for IDPs. KCA/NGCA IDPs also have the highest levels of income inequality between quartiles even as they report the overall lowest levels of income.

o Freedom of movement: Freedom of movement has sharply decreased for IDPs, whereby newly erupted conflict has given way to increased restrictions on travel between locations and growing displacements, many of which are people now unable to return to their place of origin. Restrictions on freedom of movement negatively affect the ability for IDPs to access basic services like health and education, alongside hampering access to labour markets. These restrictions further curtail the delivery of humanitarian assistance to people in need.