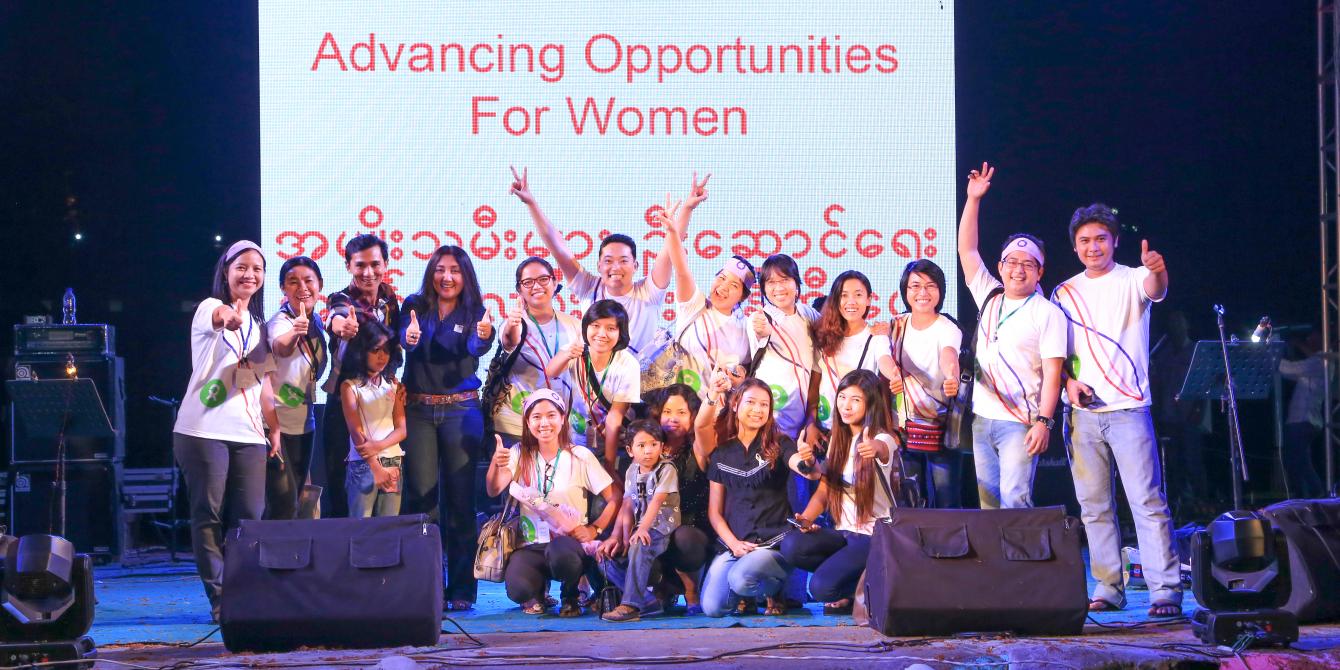 Oxfam and partner, Women’s Organisations Network (WON) will host a national celebrity concert on International Women’s Day, 8 March to raise awareness on discrimination against women and barriers to women’s leadership. Celebrities will perform songs by competition winners who last year won the chance to have their compositions transformed into nationwide hits sung by popular celebrities such as “She” and “Sung Thin Par” amongst others.

“Advancing opportunities for Women’s Leadership in Myanmar” is an initiative designed to promote women’s role in leadership positions at all levels of social, economic and political life in Myanmar. In March 2014, WON and Oxfam brought together musicians to create music to raise awareness on women’s rights, women’s leadership and the role for women in governance and politics. Celebrities and communities participated in a nation-wide song writing competition, and winning entrants saw their songs recorded, shot to music videos and featured on a DVD alongside famous national celebrities and local musicians. This concert on 8 March, will now bring together winning entrants, celebrity musicians and women leaders in Myanmar.

Evidence shows that despite equality before the law, women continue to be blocked from taking up positions of leadership, are discriminated against in the workplace, are subject to gender based violence, and lack female role models to encourage aspiring young women to become involved in leadership roles. Women’s participation in leadership roles and political processes is very limited. As Myanmar’s reform process gathers speed ahead of this year’s election, it is clear that long-term development goals will not be met without tackling gender inequality.

Mar Mar Cho, Coordinator of WON said: “This initiative helps to show that women face so many barriers to break out of their traditional roles. Their skills must not be left out if Myanmar is to reach its full potential and the people of Myanmar must take action to support them in challenging discrimination. These songs really help to raise awareness on this and promote the value of women’s roles in leadership and decision-making.”

Research shows that women face multiple barriers to equality that only strong and co-ordinated action will help to challenge. It is vital that the Government of Myanmar and other decision-makers prioritise and budget for the National Strategic Action Plan for the Advancement of Women, establish and implement a strong Anti Violence Against Women Law and invest in public services which benefit women. But this alone is not enough. Action is needed to challenge the social attitudes and norms that hold women back and stop them from accessing leadership roles.

“Women are so important to Myanmar’s future success. I want to use my profession to help women from all backgrounds overcome the barriers they face and become local to national leaders.” Sung Tin Par (vocalist)