Oxfam says concern is growing over the potential impact of cyclone Mahasen on all affected communities, particularly people displaced by conflict in the Western state of Rakhine in Myanmar.

“Oxfam welcomes the steps being taken by the government to ensure all affected communities including those displaced by conflict are relocated to safe places but swifter action is needed to ensure people are moved before the storm hits” says Jane Lonsdale, Acting Country Director for Oxfam in Myanmar. “It is essential that humanitarian principles are adhered to in moving all affected populations safely to suitable locations and that no one is left out.”

The cyclone, now expected to hit land on the border of Northern Rakhine and Bangladesh around Thursday 16 May is likely to be felt across the Western Myanmar state through heavy rains, high winds and flash flooding. This threatens to devastate people displaced by the ongoing conflict and stranded in unsafe camps at risk of flooding.

The secondary effects of the cyclone including heavy rains and flash flooding will impact on communities scattered across a wide area, causing damage to property and livelihoods and potentially threatening lives. “The government must not neglect isolated communities which could become forgotten.” says Lonsdale

Lonsdale expressed concerns over access to the areas of impact, stressing that it is crucial to ensure that international aid agencies can reach the people that will be affected by the impact of the cyclone. 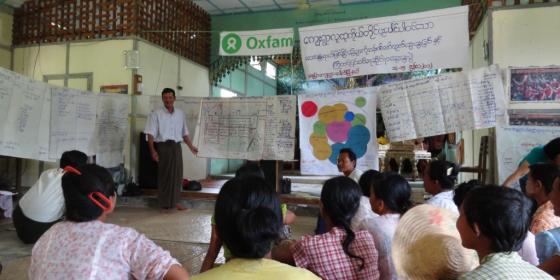 Myanmar is one of the most disaster risk prone countries in the world. Each year, people in Myanmar continue to be at risk of cyclones and flooding as well as droughts in the central Dry Zone of the country. Ongoing conflicts in Kachin and Rakhine also have serious consequences for communities’...