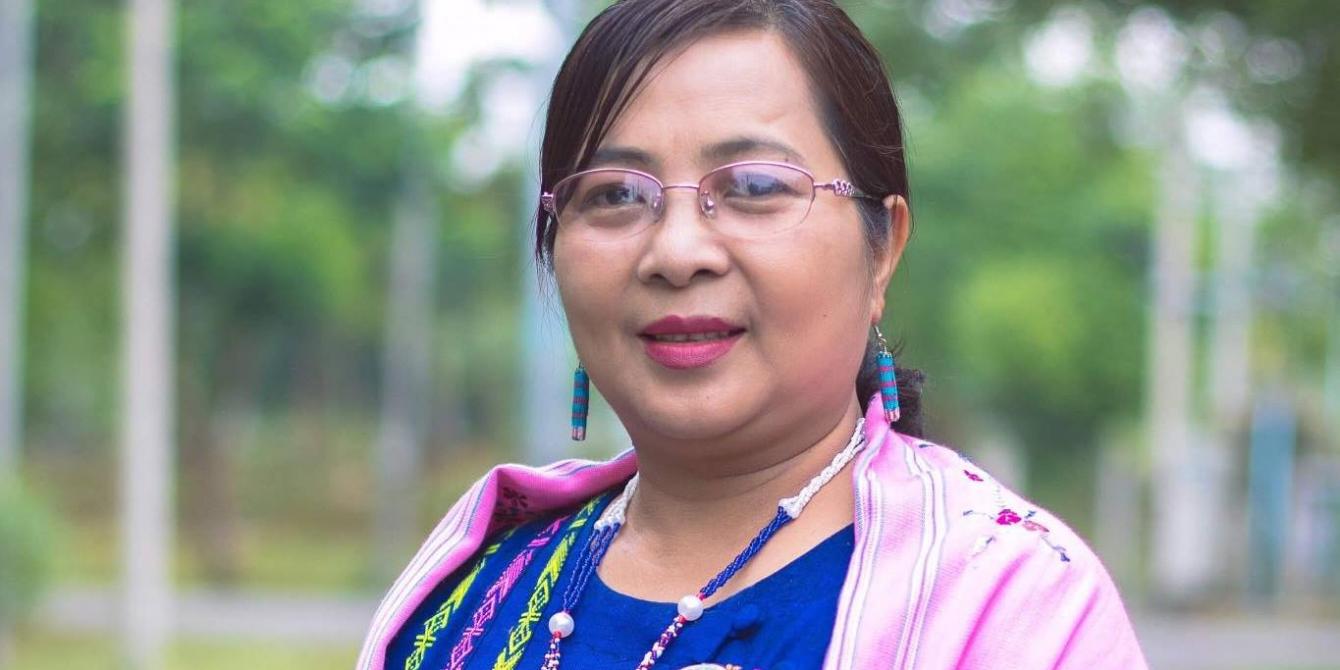 “I have been talking to women about leadership for a long time. Thus, I thought I should not avoid taking on a leadership role myself when I was asked to take responsibility. Thus, I took part in the election (in 2015) to demonstrate that responsibility a
Daw Shwe Shwe Sein Latt
Amyotha Hluttaw

“I have been talking to women about leadership for a long time. Thus, I thought I should not avoid taking on a leadership role myself when I was asked to take responsibility. Thus, I took part in the election (in 2015) to demonstrate that responsibility and accountability I feel,” said Daw Shwe Shwe Sein Latt, a member of parliament for No.3 constituency of Amyotha Hluttaw, Bago region. Ma Latt, a short form of her name that her friends and colleagues use, is an activist for human rights, women’s rights, and justice. She holds a Master’s degree from the Asian Institute of Technology with a major in Remote sensing and GIS. In 2009, she founded Phan Tee Eain (creative home) organisation that promotes gender equality and provides civic and voter education. In 2015, ahead of the national election, she got an opportunity from the NLD to run for political office. “I asked others to lead. If I didn’t take that responsibility when I was asked, it is not fair. I know there will be a lot of challenges if I run as a candidate for the election. At that time, I was the breadwinner for my family. But I know an opportunity will come only once. The party required educated and expert women. Thus, I decided to run for the election,” she said.

Ma Latt and her seven siblings were taught to be independent and conscientious as they grew up under the care of good parents. “Since I was young, I love freedom. I did what I like to. I helped others like buying groceries for neighbors,' Ma Latt recalled of her childhood. Ma Latt was not only supporting with household responsibilities but also actively participating in school activities. Her parents explained to her the importance of accountability, and she followed it in her everyday life. Her parents themselves were involved in political movements, so she was engaged from an early age. Ma Latt’s most interesting hobby is reading books. 'In my childhood, I used to get 1 kyat on every Friday as pocket money from my parents. I used it to pay for borrowing books.”

“There were not a lot of media in my childhood. My political dialogue began from the conversation in my neighborhood. I am good at making friends with others. My mum called me Ma Sat Su – a girl who wants to know everything. Although my mum does not go out much, she knows what is happening in the community. That’s me sharing back to her.”

Ma Latt grew up differently compared to the majority of girls in Myanmar. Like other Asian countries, social norms and practices often limit girls in particular in terms of their freedom, further education and career possibilities. Socially constructed norms often create restrictions, barriers, and challenges for girls and boys as they are taught how to behave in certain ways and what sorts of activities are appropriate based on their gender. Girls tend to face more restrictions on their behaviors and aspirations and there exists significant gender-based discrimination, violence against women, and a lack of opportunities for women to meaningfully participate and lead in all sectors. Reflecting these social norms and discriminatory practices, Myanmar ranked 148 out of 189 countries according to a global gender equality index in 2018.

“The education system is the key to change. It is where women’s role in every aspect of Myanmar society can be highlighted. And yet, today only negative things about women are taught in schools- for example, saying women can destroy the nation. The education system must promote a balance in society. If a family can not afford to send their children to school, too often boys are prioritized over girls for continued education because society believes an educated person can lead the family - and men are recognized as leaders of the family by societal norms. Men are the priority, and women are recognized as second class. However, if you look at a successful family, the mother is key. A family cannot be successful only if the father is smart. If a nation prioritizes education, capacity building and leadership for women, it will be more successful. Look at other countries. Developed nations are those who support women and recognize their capabilities”.

In Myanmar, due to social norms, it is difficult for a woman if she wants to get into politics. There may be personal attacks based on norms, other difficulties such as financial issues due to the unequal access to economic opportunities that women candidates must face. Because of those challenges and barriers, women need to have an enabling environment that supports them in taking up leadership roles.

“Women should support women. My friends supported me both financially and physically. Although I faced financial difficulties, those supports helped solved them. The election period was the most difficult time in my life. It was full of tears. I had to overcome a lot and I really relied on my family and network of friends.”

Ma Latt’s commitment to women’s leadership goes beyond her own role: “I ensured women’s participation in my campaign. Men bring only men in their activities. They think women are not good at politics. In reality, women are better at organizing people. There is a need to recognize and acknowledge women’s capacity.”

Daw Shwe Shwe Sein Latt is a member of Amyotha Hluttaw; and a member of the budget committee and the ASEAN parliamentary committee. She was involved in the discussions related to legislation and initiated discussions on gender equality and women's rights in Hluttaw. She supports action against rape perpetrators and ensuring access to justice by the survivors; she has been active in forming women's clubs for collective social activities; leading for the opening of fever clinics as part of COVID-19 response are some of her significant contributions to her constituency. “I did those activities with women. All volunteers are women. Just give space to women. They can do, and they will do. Men are hesitant to give a space for women, so women have to do those that men do not want to do or cannot do. Mostly, men think building bridge and roads are their job. They think other important things such as education, health, women and children issues are not their concerns,” Ma Latt said.

“If one wants to be a politician, she/he has to take accountability. If one is not satisfied with what others do, then they must try to take responsibility and act themselves. Run for the election. One may face challenges like me or may face different challenges. However, the pathway to success is overcoming the challenges. And supporting politicians and political campaigns is also an important part of engaging in politics. I would like to say every woman to support women in politics,” Ma Latt urges. She said she will continue supporting more women entering into politics as she continues working for the country.

Disclaimer: All photos used in this story are taken from Daw Shwe Shwe Sein Latt's Facebook account with her permission.

“I’ve faced a lot of challenges in my political journey. All the struggles made me stronger."

“I have self-confidence. I have done several jobs. As I believe I need education in order to be smart with courage, I attended several training courses. I am confident that I can do anything”. Ma Kyi Pyar is a Member of Parliament, one of a totals of 18 women MPs in the Yangon region